Real estate in Kisumu has grown at an admirable pace as far as the construction of commercial and residential houses is concerned. Realtors concur that the outcome of the General Election in March may also be a game changer in the lakeside city.

The election of a governor with development policies that would improve on planning and expansion of infrastructure would be a plus for the county. Apart from the skirmishes that left Kisumu scarred, real estate has grown admirably. According to the Kenya Economic Survey 2012, Kisumu is among urban areas that have created the highest number of jobs in construction, banking and insurance.

Economists project that the recent Sh4.8 billion project sponsored by the French government to improve infrastructure in Kisumu would also boost construction. According to Kisumu mayor Sam Okello, the components of the project would change the face of the city and attract investors. “It entails major improvement of roads, schools, health facilities and construction of three transport hubs at Nyamasaria, Otonglo and Mamboleo,” says Sam.

Changing economic climate Lake Estate Agency Ltd director Nishma Karia says changing economic climate has increased demand for upmarket homes and apartments. “The demand for both existing and apartments under construction in Milimani increases by the day,” Nishma says. Over the past decade, private developers have fallen over each other in a rush for space to construct commercial and residential buildings. The steady growth also attracted the Diaspora according to Tom and Company Agencies managing partner Aba Eban, “They (Diaspora) own nearly 60 per cent of property transactions annually in Kisumu alone,” says Aba.

He says the majority of their clients are Kenyans based in South Sudan, South Africa and Rwanda among other African Countries. Following the growing interest from the Diaspora market, realtors have embarked on homes expos to tighten their grip on the lucrative market.

“The latest homes expo was between June 22 to 24  last year in Kisumu towards showcasing the resurgent real estate subsector,” says Aba. He adds that the fifth annual Kisumu Homes Expo targeted representatives and contacts of the Diaspora. But as the real estate subsector shift to top gear over the years, prices of property have not been spared. And the ongoing development of infrastructure is also an influencing factor.

Ounga Commercial Agencies Director Eric Ounga says prices of land adjacent the expanded Kisumu international airport have gone up.  “An eighth of an acre plot sells at approximately Sh800,000 — this is an area where private developers avoided five years ago,” he says. Controlled developments Currently, private developers are borrowing a leaf from Nairobi by construction of controlled developments and gated communities. Ounga argues that investors are eyeing the area to construct residential houses and commercial buildings to reap from the airport. “There is also a rush to purchase a quarter acre plots that currently sell at Sh1.5 million in the leafy Riat Hills,” he adds.

All Africa Golden Tourism Hotel Manager Chandrakant Devji Chhabhadia says the face of the real estate subsector in Kisumu is changing. “The demand for hospitality has hit the roof in the lakeside city and competition among investors has narrowed down to provision of extra services,” he says. He adds that they resolved to transform the building into a hotel to increase supply as population of visitors increase. A drive around the lakeside city today reveals a resurgent real estate subsector from the ashes of the post-election skirmishes, five years ago. For instance, commercial buildings that were reduced to debris are a beehive of activities after they were reconstructed.

The ongoing construction of the multi-storey Tuff Foam Shopping Complex and a hotel within the Central Business District would spur real estate in Kisumu. And private developers are also competing to construct flats targeting staff of the several corporate firms that have opened up offices in the area. The availability of 25 banks offering loans and mortgage facilities to developers in real estate in the area could partly explain the current construction boom. As the real estate continues to grow, suppliers of construction materials are also reaping from the subsector. The managing director Building Construction Concepts Ltd at Mamboleo junction on the Kisumu-Kakamega Road Christine Jackino says: “We leased this space next to the highway to sell building materials following the construction boom in Kisumu and its environs.”

According to her, reconstruction of Kisumu after the post-election skirmishes that left the city battered informed the business in 2009. “Reconstruction started in 2009 before several private developers started constructing private homes, flats and apartments,” she says. The Government also embarked on projects to construct several roads in the area, while part of many Constituency Development Funds (CDF) built schools and dispensaries.

Economists concur that the current improvement of infrastructure in the area has a ripple effect on real estate, which encourages private investors. For instance, President Kibaki recently commissioned the rehabilitation of the Nyamasaria-Kisumu-Kisian Road.

The 25-kilometre road network is being rehabilitated at a cost of Sh5.8 billion and is being contracted by Chinese construction firm Sino Hydro Corporation. “We have since sold concrete products like building blocks, culverts, concrete posts, paving slabs and drainage blocks,” says Christine. She adds: “Our clients come from as far as Awendo, Homa Bay, Kendu Bay, Busia, Kakamega, and Kericho among others.”

Christine says that the majority of developers prefer buying materials under one roof to save on time and cost. She says that they currently produce 1,000 construction blocks a day and can sell nearly 70 culverts on a good day. 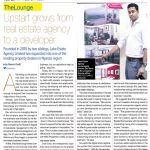